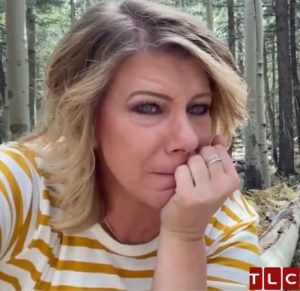 Many viewers of “Sister Wives” wonder why Meri Brown stays with Kody after years of tears and heartache. After all, Kody has publicly confessed; he has no romantic feelings towards her.

Why would any woman stay in an abusive and neglectful relationship? (No judgments here…)

One recent cringing TLC scene shows Meri giggling with the smallest crumb of attention, a S’more from polygamist Kody, and only because Robyn initiated it.

Could it be that the only way Meri can cope with being rejected by the man she loves is to laugh?

Viewers have wondered if the S’more scene was secretly scripted to create more sensationalism, so the TLC gravy train doesn’t come to an abrupt end. (Meri is a businesswoman, Kody a salesman, and Robyn, an actress.)

Curious viewers have also been speculating why Meri sticks around obeying Kody’s rules: to keep an ongoing relationship with the younger children, wanting revenge or control, a return on years of investing in Kody’s relationships, helping create a new twisted plot for ratings, low self-esteem, a commitment for better or worse, religious devotion, genuine love for Kody and Robyn, etc…

Every woman’s polygamy experience is different. Yet, there are also many similarities in religious-motivated polygamy.

Our view is that no matter the woman’s motivation to stay, it does not outweigh the inherent harms of polygamy. She has a responsibility to leave for herself and her children.

Polygamy.org can only stomach bits and pieces of “Sister Wives” and rely mainly on what commentaries, media, and followers of “Sister Wives” write. Plus (a huge plus), we don’t want to create more audience for TLC and enable Kody to continue exploiting mothers and children for his personal financial gain.

As ex-sister-wives from Mormon Fundamentalist beliefs, similar to the Brown adults, we understand the stronghold of this form of polygamy.

There are many victims and survivors of polygamy. While Meri and the Brown adult family members purposefully put themselves in front of the media to show the world how wonderful polygamy is, minus Christine, none of their children want to live it.

That is the difference between polygamy victim and survivor.