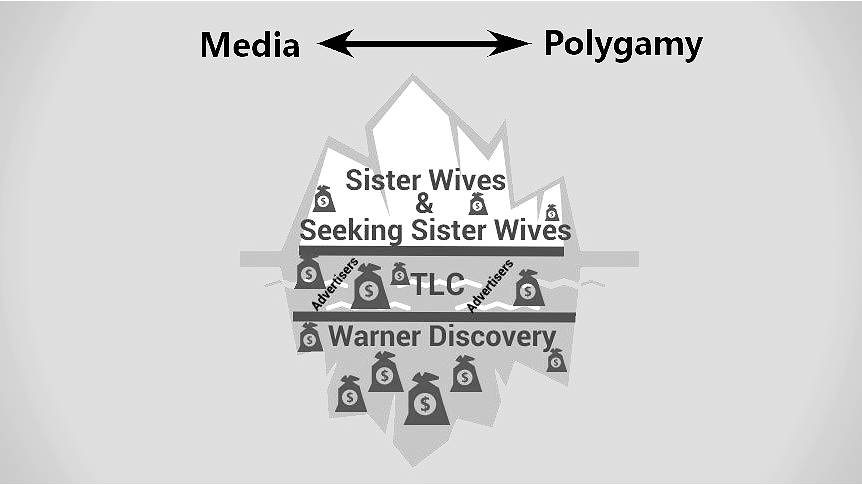 Polygamy.org is committed to supporting women and children in polygamy who have no choice or voice by asking the media to take accountability.  We are boycotting Warner Bros. Discovery TLC polygamy shows and hope others will join us. We are grateful for individuals recapping and keeping the public informed.

Ex-Sister Wives: “Knowing the difference between fact and fiction goes a long way.” Much of the public is catching on that “happy” polygamy reality shows are greatly fictionalized, partly due to editing, sensationalism, deception from sister-wives hiding painful emotions, and not showing the drama off camera.

TLC polygamy shows are male directed: from the top of Warner Bros. Discovery’s financial feeding chain to TLC and downward to the ego-driven polygamists center stage. Sister-wives are used to make the invisibly patriarchal linked chain work. Without females, it would be a bunch of men playing with themselves.

We assumed, as sister wives, that God (who just happened to be male) had commanded polygamy in scriptures until waking and realizing the writings and teachings were from men. So not only have male leaders told women what is best for them but these beliefs and attitudes are also from entirely different eras (women’s rights & voices were not popular until recently).

People always recap fiction, including retelling scriptures or Bible stories about polygamy.   As women, it was important for our health and well-being to learn the difference between manufactured religion and reality to “escape” polygamy.

Most participants in “Seeking Sister Wives” do not use the excuse “God told us” – these men are male opportunists.   If women are okay with this behavior or living for their man, it’s their choice. But in religions promoting polygamy based on male supremacy, unless a woman pulls out of the relationship and leaves with her children, they will continue to be conditioned to believe polygamy is valid (or justifiable). One reason polygamy laws exist and should be enforced is to protect children from generational abuse.

3. A polygamist manipulating (Marcus Epps) conning a woman into becoming a plural-wife by being “tricked” by a “slimy dude” who wants to add another sex partner into his family. (6:03 – 7:27)

Ex-Sister Wives: Manipulating and deceiving is the game’s name for a polygamist; it is their modus operandi to get women and keep them from leaving.

Ex-Sister Wives:  Some men, including a politician, might believe the label of polygamist looks better than being caught as a cheater or having a mistress. However, more should be expected and required of public officials who promise to uphold the laws of the land. Not only is polygamy a crime this councilman is trying to recruit wives on national television. “Brown on Cleveland,” says it better than we can! Read more at Euclid Councilman Marcus Epps Appears on TLC’s Reality Show Seeking Sister Wife; Isn’t Polygamy Illegal?

5. Big bed theory: This was recapped quite a bit since wives share the same bed with their husband and then leave it for sex. Nikki Haverstock mentioned being a light sleeper. Also, concerns about a mother with a newborn (apparently, one of the sister wives is pregnant) and the importance of having a spouse get up and help because a mother being alone “leads to increases in postpartum depression & anxiety.” (3:03)

Ex-Sister Wives:  Who cares about sex between consenting adults all in a bed or one woman at a time waiting her turn to have sex with a shared man, except don’t call it “marriage.”

Think Sisters, and have compassion for the majority of the women and children worldwide who are being victimized due to polygamy because a man is entitled to have multiple spouses, who are reduced to live-in sister-mistress.

As far as a mega bed, hopefully, his family is not considering putting an infant to sleep in the family bed with a bunch of adult sleepers; right?

It is beneficial for a birthing mother to have a supportive partner for baby feedings, and breaks should never be minimized, yet in polygamy, it often is. When a husband takes an additional wife, the relationship completely changes. No longer can he attend to mothers and children due to added time restraints. Mothers’ are expected to do the majority of the work. Often co-wives become jealous of the fertile mother and resentful when they ask for their husband’s help. Some women who cannot have children are reduced to the tight-bodied sex wife or taking care of other mother’s children. A polygamist hopping out of the family bed for baby feedings, diaper changes, and comforting a sick or a crying child is unrealistic.

Sharing a co-bed might work for some “Seeking Sister Wives” now, yet it will get more difficult unless spouses hold their bladder all night or are okay waking up others while climbing out of the family bed (of course, small bladders can always sleep on the side of the bed). Headphones and light noise would hardly keep the sounds of loud snoring – however, a soft group snore might lull everyone to sleep. Air diffusers could compensate for a morning breath, but what about multiple bodies farting? The twisting & turning, stealing blankets, and being interrupted by a sister-wife and husband venturing away to have sex in the other room is ridiculous.

Does anyone buy this one-sided big bed theory?

Ex-Sister Wives: A polygamy pattern of emotional trauma generally occurs. Often the first wife or prior sister wife revels in the next sister wife experiencing the pain when a new woman is brought into the man’s family circle. (It can be sadistic). It’s a form of payback. But, of course, the emotionally toughened sister-wife won’t ever divulge this secret. Generally, polygamy is more difficult for the last sister wife brought in after recruiting a new sister wife and more accessible for the incoming sister wife. (Women love the newlywed stage until it’s another woman’s turn.)

Conclusion: An excellent marital relationship starts with a woman recognizing her worth, needs, and desires. Successful marital relationships depend on every participant being treated with respect and meeting their needs. There is no possibility of equality or “fairness” in polygamy.